Visit our Photo Gallery with over 62'000 photos and growing daily!
by admin • October 22nd, 2020
In Bed With Channing Tatum 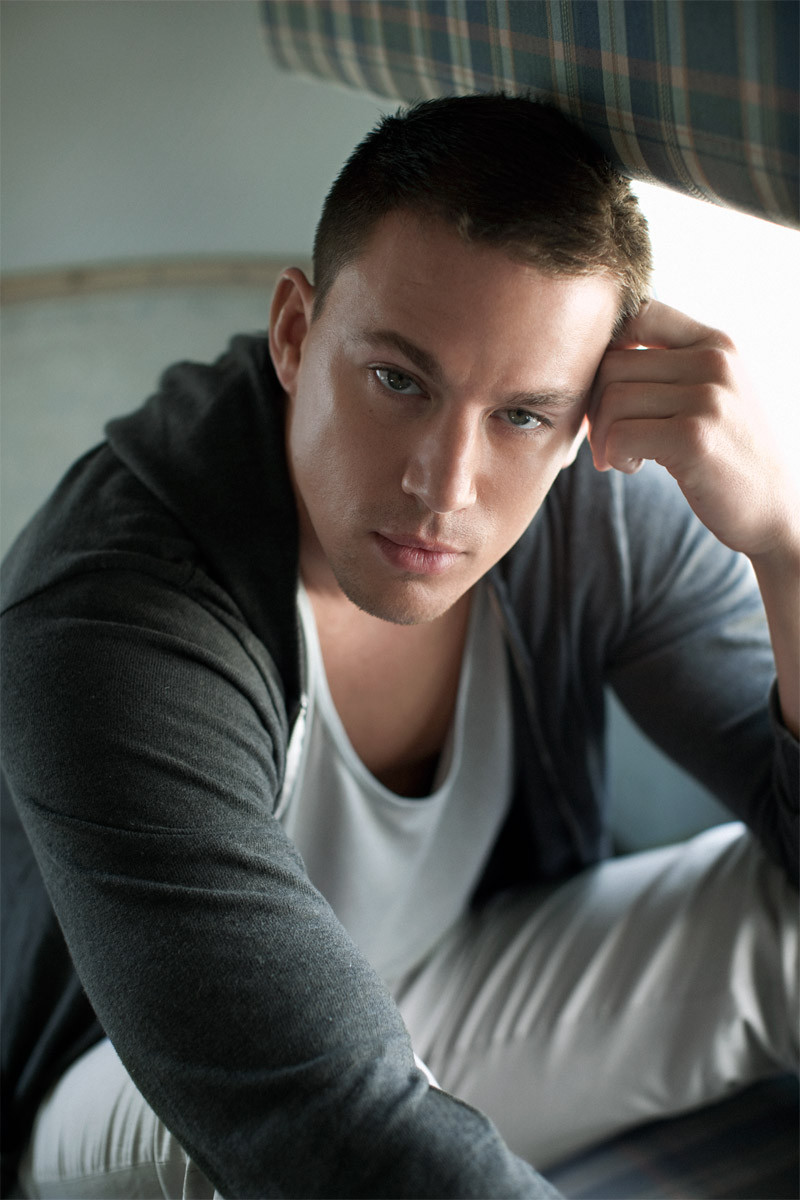 How he stripped, strutted, and sculpted his way into the multiplex—and our hearts

by Mickey Rapkin for Elle

That Channing Tatum has become one of Hollywood’s most compelling leading men could be considered something of a surprise. Sure, he was highly watchable in 2006’s Step Up, but many had written him off as a walking six-pack gifted with the power of speech. Yet 2012 was a game changer. With 21 Jump Street, the onetime model proved he could tell a joke—and be the butt of one, too. He romanced Rachel McAdams in The Vow, then became one of Steven Soderbergh’s secret weapons in Magic Mike, which was loosely based on Tatum’s own experiences as a young stripper in Tampa. This summer, the Alabama native gets busy saving the president in the thriller White House Down. With all that box office heat, one might expect Tatum, 33, to be sowing his wildest oats, but those days are firmly behind him; he married his Step Up costar Jenna Dewan in 2009, and they’re now expecting their first child.  The biggest surprise about Tatum, though? He’s a sculptor in his spare time. Here, he talks the pleasures of the female form.

Would you share an embarrassing childhood story involving a girl?

Hm. I’m trying to think of something that didn’t work out in my favor.

Because they all did?

No, no. [Laughs] It definitely wasn’t all good. The first girl I ever kissed was named Danica. She broke up with me through a friend who yelled—out the bus window—”Oh yeah, Danica doesn’t want to go out with you anymore.” The whole bus burst into laughter.

Who was your first celebrity crush?

Alyssa Milano in Who’s the Boss? She was it, man. I’d love to run into her. I’m pretty sure I’d geek out. Isn’t she married?

Yes. And so are you.

I was about to say!

You’ve said you “love being in love.” Were you always the monogamous type?

Being in a relationship was always the endgame, but I’ve had my crazy times. When I was stripping, I wasn’t with anyone. That’s not an occupation you have when you’re monogamous.

What’s the craziest thing a woman offered to do back then?

I think you’ve got the craziest stuff I could do or say in Magic Mike.

So the penis pump scene was autobiographical?

Of course. [Laughs] You’ve gotta get it where you can get it, man.

You and your wife met during Step Up—at the start of your career. Did any of your bros say “You’re about to be a star. Don’t settle down now”?

I had just gotten out of a pretty long relationship, so I was in no way ready for another. I was trying to run from what I knew Jenna was—not someone I was just going to date. But one of my buddies was like, “What are you doing, man? She’s dope.” That night I showed up at her hotel room with a sombrero on, and that was it.

Wait. Why a sombrero?

We were drinking at a Mexican joint and I stole it off the wall.

She once said as soon as you get home, you get naked. What’s that about?

I don’t really know. I have a really nice back porch where the pool is. Once the shoes are off, the socks come off too, and then everything else downstairs just follows at some point.

You’ve been together for seven years. How do you keep it fresh?

I wish I could say it was one thing. But I think communication and being brutally honest about the things that you want—what you fantasize about, or whatever…. No matter what, talk to each other. That stuff you might be nervous to hear? You gotta want to know.

People often say you find out who you married in the bad times. Was that true for you?

Yeah. I’ve got two stories. I was broke and I couldn’t pay my half of the rent when we were first together. She was basically my sugar mama for six months.

What’s the second one?

Most people would panic. “This is your fault! Blah blah blah!” But Jenna was completely sane, just trying to get the job done. We got out, covered in mud, and there was one more beer in my bag. We shared it by the side of the road.

Have you ever received any particularly good advice about women?

Jenna and I have a trick we use to check in with each other. We say, “On a scale of one to 10, how much do you love me right now?” It’s not as romantic as you think. Sometimes it’s like, “I love you at a six right now. I have an issue, and you asked. So now I’m going to tell you….”

I heard you’re a sculptor. What do you sculpt?

I really love anatomy, in general. I like sculpting bodies.

Are we talking live, nude models?

Not yet. I’m sure that’s on the docket. My sculptures look like my wife. Not pregnant. [Laughs] Her old body.

That comment might make her love you at a six. Is it true that pregnant women want to have sex all the time?

It’s a bit of a paradox. They’re definitely hormonally raging, but when they get further along—they’re just dealing all the time. So, yes and no.

What movie puts you in the mood?

I don’t know if I have a baby-making movie. But every time we watch The Notebook, my wife looks at me while she’s crying and makes me promise we’re going to die together in bed. I’m like, “Can we not talk about how we’re going to die?”