Visit our Photo Gallery with over 62'000 photos and growing daily!
by admin • October 22nd, 2020
Channing Tatum’s Body of Work 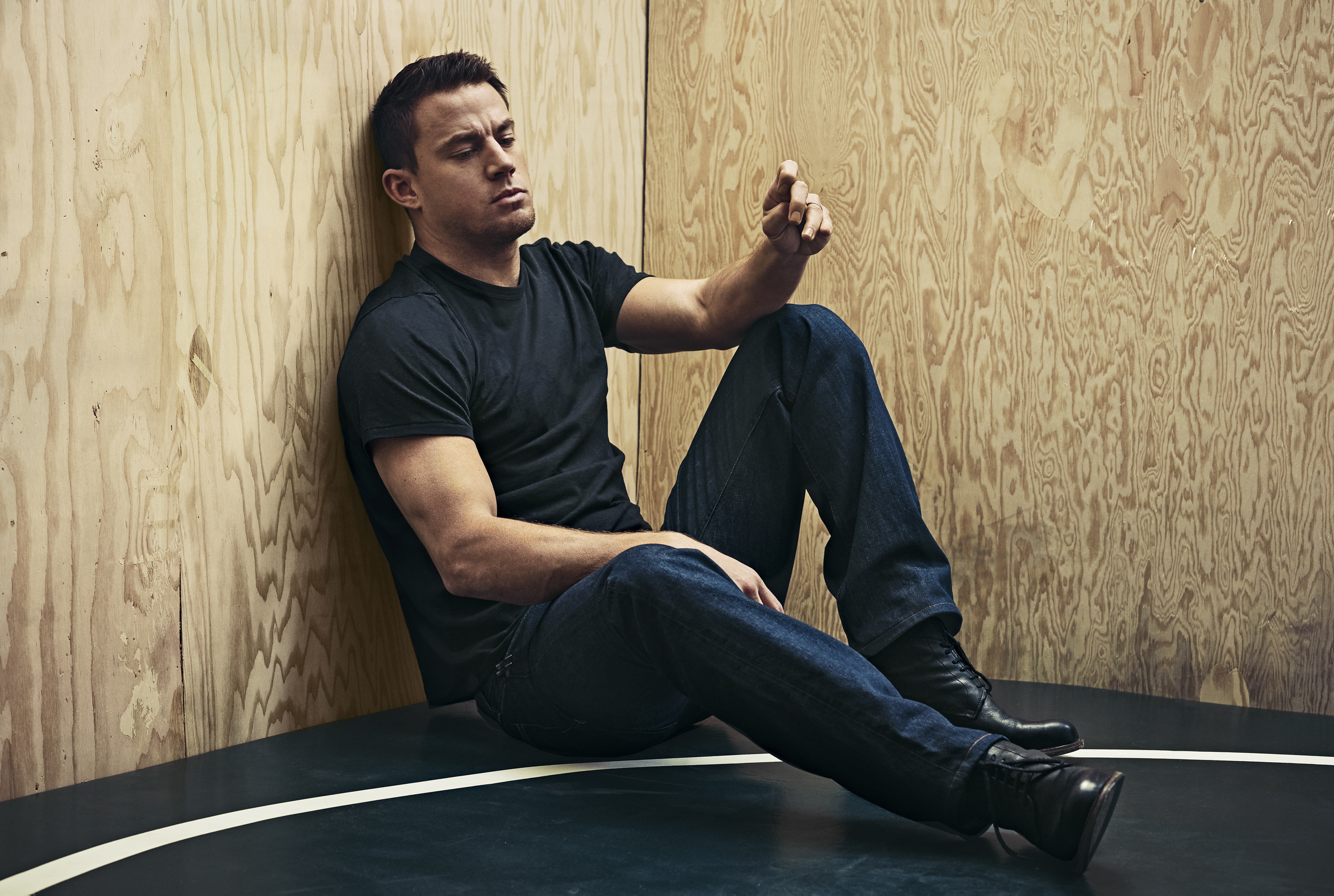 by Sam Lansky for Time

Channing Tatum has a cold, so instead of shaking my hand, he bumps his elbow against mine by way of greeting. Like so many of Tatum’s mannerisms, it’s a little funny: there’s some machismo there, but it’s also goofy and oddly sweet. Those qualities intersecting–therein lies his charm.

We’re at the Beverly Wilshire Hotel in Los Angeles. Earlier, during the photo shoot, he’d been more agile than his brawny physique would suggest, taking the photographer’s direction to extend his arms like a fighter, then dropping nimbly to the floor to hit another pose. Now in an armchair with a cup of tea, he’s still expressive–thoughtful, chatty, ever the good sport. All that charm is striking to see after watching him give such a muted performance in Foxcatcher, which may be the most claustrophobic, least uplifting sports movie of all time.

It’s the darkest role yet for Tatum, who’s eager to prove that he’s more than just hired muscle. He’s been an action star in over-the-top ordnance rippers such as G.I. Joe: The Rise of Cobra and White House Down, and a heartthrob in high-grossing weepies Dear John and The Vow. He’s been an adept comic foil to Jonah Hill in 21 and 22 Jump Street, as well as dirty-dancing eye candy in his 2006 breakout Step Up and the semiautobiograpical male-stripper pic Magic Mike. “I’ve been the hungry kid at the buffet,” Tatum says of his varied background. “I’ve wanted to taste it all.”

But Magic Mike wasn’t just chiseled male bodies on display; it marked Tatum as a more complex figure than his filmography indicates. Produced by Tatum and inspired by his experiences as an exotic dancer in Florida, the film, directed by Steven Soderbergh, earned favorable reviews and turned into a box-office hit, raking in $167 million worldwide from a $7 million budget. (A sequel, Magic Mike XXL, will be released next year.) If Tatum is perceived by some as a good-looking lunk, he’s not bothered by that. “Look, my parents had great genes. I was able to model for a short time,” he says. “I still need to make myself understood. That’s my job.”

That’s tough to do in Foxcatcher, which tells an eerie, confounding true story that can’t be easily synopsized. Tatum plays wrestler Mark Schultz, a 1984 Olympic gold medalist living a humdrum life in snow-caked Wisconsin. His only bond is with his charismatic older brother Dave (Mark Ruffalo), also a gold-medal winner, who is warm and extroverted where Mark is reticent. Mark gets a ticket out by way of wealthy John du Pont (Steve Carell), who invites the athlete to move onto his Pennsylvania compound and train for the 1988 Olympics as part of his Team Foxcatcher wrestling squad. But du Pont, an ornithologist and heir to the chemical-company fortune, turns out to be mercurial and controlling, and the relationship between the two men unravels. When brother Dave agrees to coach the team, events spin toward a shockingly violent conclusion.

It’s a challenging film and not immediately rewarding, a Greek tragedy in slow motion. Director Bennett Miller builds tension with unrelenting authority, but the climax arrives too late to provide much resolution, offering instead a lingering, palpable unease. Three exceptional performances make it all the more riveting. As du Pont, Carell wears a prosthetic nose and decayed little teeth; his motives could be benevolent or sinister. Ruffalo radiates fraternal warmth as Dave, a beacon of positivity in a dark film. Then there’s Tatum, who doesn’t so much play the part as disappear into it. Off the mat, he hulks and staggers, yet there’s a lightfooted grace when he wrestles.

If anything, Tatum says, the experience was doubly gratifying because it almost didn’t happen. After Miller made 2005’s Capote, which was nominated for five Oscars, including Best Director, he wanted to turn his attention to the fascinating story of Foxcatcher. He’d been impressed by Tatum in the 2006 indie A Guide to Recognizing Your Saints. “He exploded in that film to me,” Miller says. “He was dangerous and flawed in a way that he didn’t realize.” But in its earliest stages, Foxcatcher didn’t capture Tatum’s attention.

“I read the script seven years ago,” Tatum says. “I didn’t get it at first. Why do you want to make this? There’s no resolve. There’s no nothing. Thank God I didn’t do it then. I don’t think I would have understood it.” But when the two men reconnected during a chance meeting on the Sony lot years later, Tatum saw the project in a new light. “He made a specific choice not to resolve it,” he says. “We just paint a portrait.”

The end result has all the subtlety of Miller’s original vision. “I’m proud to be in a movie this great,” Tatum says. “Bennett is a master filmmaker. But it wasn’t an easy movie to make. Bennett doesn’t have a set [where] you joke around. He keeps it quiet and intimate and charged.”

Du Pont’s relationship with Mark Schultz is a snarl of envy, revulsion and repressed homoerotic lust; accordingly, on-set camaraderie was limited, maintaining a strained vibe between Tatum and Carell. “We weren’t in character all the time, but we didn’t hang out offscreen,” Tatum says. “We carried the energy of our relationship around with us.”

With Ruffalo, Tatum cultivated a closeness that buoyed him through a challenging production, in large part due to their physical scenes together. “You can’t fake wrestling,” Tatum says. “You can’t fake hitting the mat together. It’s very intimate. You’re close. It’s a language with each other. You become aware, after a repetitive activity together, of where the person is all the time.”

There was great intimacy too between Tatum and the real Mark Schultz, who went on from his Olympic gold to win two world championships and be inducted into the National Wrestling Hall of Fame. (Schultz’s autobiography, also titled Foxcatcher, is out Nov. 18.) They spent a week together before production began, to which Tatum credits the specificity of his performance. “How I walk in the movie is Mark,” Tatum says. “That’s not me making some actor choice. I tried to mimic the way he walks–the way he holds his fork.” Because Schultz was so deeply withdrawn, Tatum is too. “He was like, ‘I wanted to be a caveman. I wanted to be terrifying to people. I didn’t want people to be my friend.’ ”

Foxcatcher opens in New York City and Los Angeles on Nov. 14 before slowly rolling out across the U.S. through Christmas, making it a well-timed awards contender. It’s earned Oscar buzz for all three actors, as well as for Miller, who took home the Best Director prize at Cannes–the first American director to win at the French film festival in seven years. The conversation around Carell has been particularly strong, catalyzed by his striking physical transformation.

Tatum is less focused on the film’s reception than he is on the ties he forged during the production and the time he spent with Mark Schultz hearing his stories. “To have made the connections, creatively and emotionally, with the people that were on this movie–it’s everything,” he says. “The experience was unique.” It might sound trite, but he’s completely sincere.

Which is the exact quality that made Miller certain that Tatum was right to take a dramatic turn in a demanding film. “That innocence and sweetness is something that the real Mark Schultz has also,” Miller says. “The core of the character, Channing is especially well suited to play.”

To Tatum, the most important thing was doing justice to Schultz’s story. “I’m more proud that I did something that mattered that much than I am about how good the movie turned out,” he says. “No one else will have the relationship that I have with Mark Schultz. I get to put that on my mantel.”

If Tatum bonded with Schultz while making Foxcatcher, he thinks of his Magic Mike co-stars as brothers after wrapping production on Magic Mike XXL in Georgia this month. “Those guys are so much fun. They’re the whole reason why I wanted to make a second one,” Tatum says of the cast, which includes Joe Manganiello, Matt Bomer and Alex Pettyfer, all reprising their roles from the first film. (Matthew McConaughey is not returning.) For this installment, Tatum co-wrote the film in addition to producing, making him more invested than ever.

“Hopefully you’re going to care about these guys, and then get to see a lot of ridiculous nakedness and stupidity,” Tatum says. “We got Joe Manganiello naked as much as possible. Everyone in the world: you’re welcome.”