Visit our Photo Gallery with over 62'000 photos and growing daily!
by admin • October 23rd, 2020
Channing Tatum on Vodka and the Crazy Sh*t That Happens When You Drink It 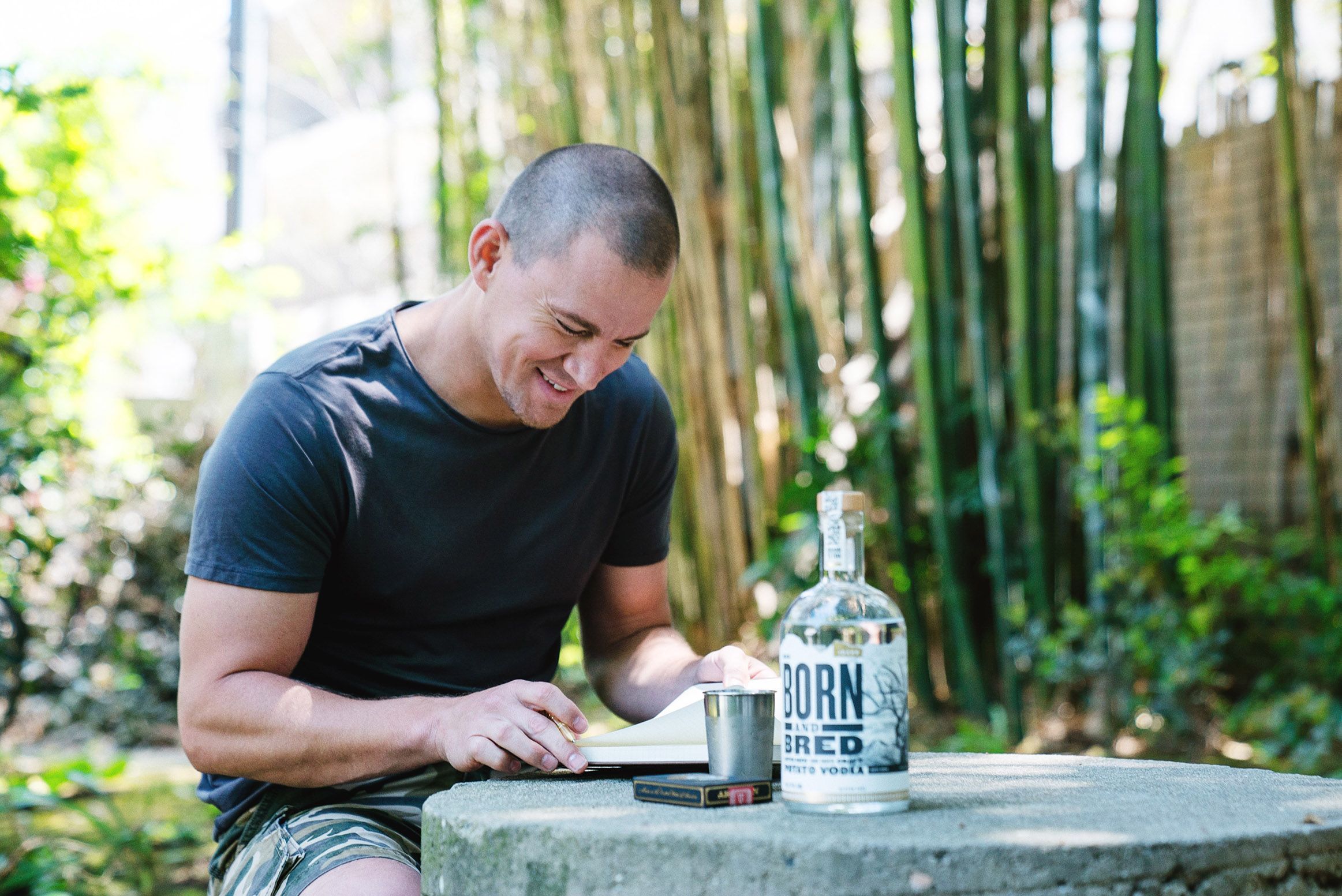 We talked to Channing Tatum about his American-made vodka, Born and Bred.

by Maggie Lange for Bon Appetit

Here’s a fun game: Which celebrity would you like to have a drink with? Just kidding that’s not a game, that’s a test, because there’s one right answer and the answer is Channing Tatum. He’s a wild card, but the generous and jovial kind, he’s great at dancing, and now he’s great at vodka. After discovering the Grand Teton Distillery on a vodka taste-test with a friend, and then snow mobile-ing his way across Driggs, Idaho, Channing Tatum has partnered with the distillery to develop Born and Bred vodka. It’s a smooth 80-proof drink that’s made from glacial water, Idaho potatoes, and Tatum’s sweat. No, no it’s not at all, but he does care about the vodka very much. Below we talked about snacks, Russia, and how to dress like you’re going to cause trouble.

​Let’s start at the beginning. D​o you remember the first time you had vodka?

That is the beginning! Probably the first time I ever had vodka, I don’t remember very much of it because we drank a bunch of stuff that night. I was probably 13, probably 8th grade. We went over to my buddy’s house. His parents were out and we raided. We had never drank before and we were making terrible, horrible drinks. Somehow we made a drink that was purple. Shenanigans happened. 13-year-olds in Florida don’t know how to drink.

I feel like Russian 13-year-olds have a good grasp of what vodka is.

Well, since you brought up Russia, let’s talk about it. Born and Bred is devoted to an America-centered vibe, but vodka seems super associated with Russia to me. Can you tell me about how you thought about this nationality thing?

It was me and my buddy Jack, we were just sitting around drinking one day and he was like why are all vodkas foreign and from somewhere cold? I would like an American vodka! This was before Titos became what Titos is. We had no intention of jumping into the business at all, we just drank vodka, that was it. From there we went on a search, we wanted to find a good American vodka. We tried 25 or so and we really only like about three. Grand Teton became our favorite. It just tasted better, different than any vodka that was on the top shelf. There was a smooth taste to do it, like a cool feeling in your mouth. The after taste doesn’t burn. That’s the difference. I haven’t talked to a lot of Russians about this, but I have gotten pretty good feedback and I don’t think they would like our vodka. They do think vodka should burn, they like the grain burn to it.

What does “less formal” vodka mean to you?​ Like what clothes would this vodka wear if it was going to a party?

A lot of vodka brands had this vibe of backroom boys wearing tuxedos, playing poker. I probably wear a tuxedo more than most 36-year-olds, but that’s not my life. I can do that, but I wanted something that could live in both worlds. Refined and quality enough to wear a tuxedo with, but that’s not where its roots lie. So the vodka would wear whatever opposite of everyone else. So if it’s a backyard party, he probably shows up in a tux. If it’s a tux thing, he probably shows up in cutoff jeans shorts and a tank top, with some cowboy boots. He’s just wildin’. He wants to just mess it all up. If everyone thinks everybody is doing one thing, she or he is just going to do the opposite of that.

So the look is, I’m-at-a-second-location?

Yes! There’s a story before the person got there, and you gotta here it. That’s our whole motto: local legends. Everyone’s got that story of that one person who did that one thing one time. From my experience, it’s with just good friends and community, that sometimes involves alcohol and feeling free and letting go, telling stories and going out and making them.

How are you communicating this troublemaker vibe?

We picked the jackelope [as the mascot] because I’m sort of obsessed with trickster archetypes, in every culture it’s an archetype of something that is cunning, that can’t just stay out of trouble.

On the inside label, once you drink it down or if you get your eye really close to the bottle, it says “Cross my heart and hope for mischief.”
That’s just what I want when I pour myself a drink. I want to just cause a little havoc, get into some trouble, get into some safe, manageable mischief.

So—I hope no offense to you—but vodka has a place in my general social circle that it’s just the most efficient way to get drunk. Do you think that’s a fair reputation for vodka?

So [laughter], yeah, you’re fully right. Most people drink vodka because they don’t want to taste it. They want to put a mix in it and just have it go away, like not taste it and get drunk, which is fine, I don’t care. Truly. Do you. [Writer’s note, he does sound like he genuinely DGAF.] I’m not here trying to be a purist telling people that they want to taste vodka. I really do like the taste, but I also get it.

Are there any boozes that are your enemy? For most people it’s tequila.

I have an equal opportunity system, but there are ones down on the totem pole. Oh, actually, limoncello! I don’t like limoncello. Oh and grappa. I’m not a giant gin guy. But I’ll kinda drink anything.

I’m going to try to combine all your worlds in one question: w​hat character did you play that you would most​ like to drink with?​

Ha. To have fun with or just to talk to?

If I’m sitting and just like in their world and hanging out, if I could only talk to them and just chill out with them, I played Pretty Boy Floyd in Michael Mann’s movie [Public Enemies]. It was smaller cameo in the beginning, I introduce Christian Bale’s character. I would like that to have a conversation that with the guy. The ‘20s in America is fascinating to me right now. Those guys were a punk rock band. They did it their way or no way. They were true outlaws of the common people and heroes for the common people.

Could you have imagined that you would have started a vodka company?

Well, if you had asked me this back when I was stripping that would have seemed more feasible to me than becoming an actor. Now, I’m a stripper that became an actor that I guess is working in vodka. Nothing surprises me anymore. It’s all shocking, every day I wake up and I have a pinch-yourself-reality moment. Even talking to you about this—you’re one of the first people I’ve really talked to about what we want to do with Born and Bred. It’s just cool! It’s just cool for me to do something new every day, I’m really lucky.