Visit our Photo Gallery with over 62'000 photos and growing daily!
by admin • February 16th, 2022
‘Dog’ Publicity Stills & Behind the Scenes

I have just added HQ publicity stills and behind the scenes images for Channing’s upcoming film ‘Dog’. Check them out over on the gallery now via the links below. You can also find more images from on set aswell as the official movie posters.

Channing recently visited Jimmy Kimmel Live to talk about getting a bunch of work after shaving his head, Magic Mike 3 being the Super Bowl of stripper movies, the demanding rehearsal schedule, making his new movie Dog, and people being able to bet on him getting bitten by a dog. If you missed the show, you can check it out via the video above and a few pictures from the appearance over on the gallery via the links below.

The actor-turned-director chops it up with fellow cinema icon and best friend Jonah Hill about the hardships of directing films, the evolution of personal style, and the journey of fatherhood

Jonah Hill spent his 38th birthday at the chiropractor after a painful surf-related injury requires an MRI. But before he can go in for the scan, Hill has to Zoom with 21 Jump Street co-star and best friend, Channing Tatum, who’s laughing on the other end from Ohio. As Hill puts it, ever so emphatically, “If Chan needs me, then I show up. That’s my rule.”

After an upheaval that led the Alabama-native into a brief Hollywood hiatus, Tatum, now 41, is charging into the future playing no games while having all of the fun.

Checking off his most challenging career feat yet—his directorial debut on February 18th with the family film Dog—Tatum is still staying busy, now simultaneously gearing up for the March 25th release of the action-adventure comedy The Lost City, alongside Sandra Bullock. While other fans might be yearning for Magic Mike’s Last Dance—a final encore to the massive franchise which helped catapult Tatum into true international stardom—the highly anticipated film will be going into production later this year. And finally, before 2022 wraps, Tatum is set to launch into the juicy role of a tech billionaire, playing alongside Zoë Kravitz for her own directorial debut in the upcoming thriller Pussy Island.

“They think they want another Jump Street, but they don’t,” Hill muses to Tatum as the VMAN cover star grins and nods in agreement. “It would just be me and Channing talking about his hip, my shoulder, and the medications that we’re on.” But no matter how many chiropractic visits or hip surgeries the two may undergo, the pair’s youthful, loving, and unadulterated friendship will last a lifetime. Boys will always be boys.

From Tatum’s forthcoming projects to the influences surrounding his fashion evolution and the tribulations of single fatherhood, the comedic duo dive into conversation to reach untold depths while leaving out none of the shenanigans.

Check out VMAGAZINE to purchase your copy and read the full article – On Sale March 1st.


by admin • February 9th, 2022
A Movie Star Returns: Why Channing Tatum Is Finally Ending His Break From Acting


Channing Tatum loves a good costume. Just watch “Magic Mike” or “G.I. Joe” (or his Instagram account). In “The Lost City,” he adds to his ever-expanding look book with Dash — a model who graces the cover of a series of romance novels by a bestselling author (Sandra Bullock), the victim of a kidnapping scheme. In the upcoming Paramount Pictures comedy, Tatum dons an unbuttoned white linen shirt and acid-washed jeans as he shows off his golden locks.

Tatum, 41, wanted the hairpiece to pay homage to a range of iconic hunks. “I definitely have a Fabio wig,” he says over breakfast one morning at a restaurant near his home in Los Angeles. “But my inspiration was the man himself that’s in our movie, Brad — from ‘Legends of the Fall.’” Yes, Brad (as in Pitt) makes a cameo in “The Lost City,” which opens in theaters on March 25. “I was like, ‘I want the “Legends of the Fall” wig,’” Tatum says as his face lights up. “I don’t even know if it was his hair. He was fucking gorgeous. And I was like, ‘Please make me that.’”

“The minute he came out of his dressing room, the wig took over his entire personality,” Bullock recalls, laughing. “We lost Channing for a moment. Someone has to have great physicality and comedic timing to take ownership of that in a genuine way rather than make fun of it. He embraced what it was, and it was pretty spectacular.”

Before he wore his hair like Pitt’s, Tatum had been following a similar career path. In the 2010s, he became one of the biggest movie stars on the planet. Tatum spent his late 20s and 30s churning out one box office hit after another — playing a romantic lead in “The Vow,” a comedic action hero in “21 Jump Street” and a stripper with abs of steel in “Magic Mike,” an autobiographical indie film based on Tatum’s early days as an exotic dancer that became a worldwide phenomenon. In addition to the 2015 sequel, “Magic Mike XXL,” the franchise has spawned an HBO Max reality series, “Finding Magic Mike,” and a cabaret show, “Magic Mike Live,” both of which were made through Tatum’s production company, Free Association.

Check out Variety to read the full article. 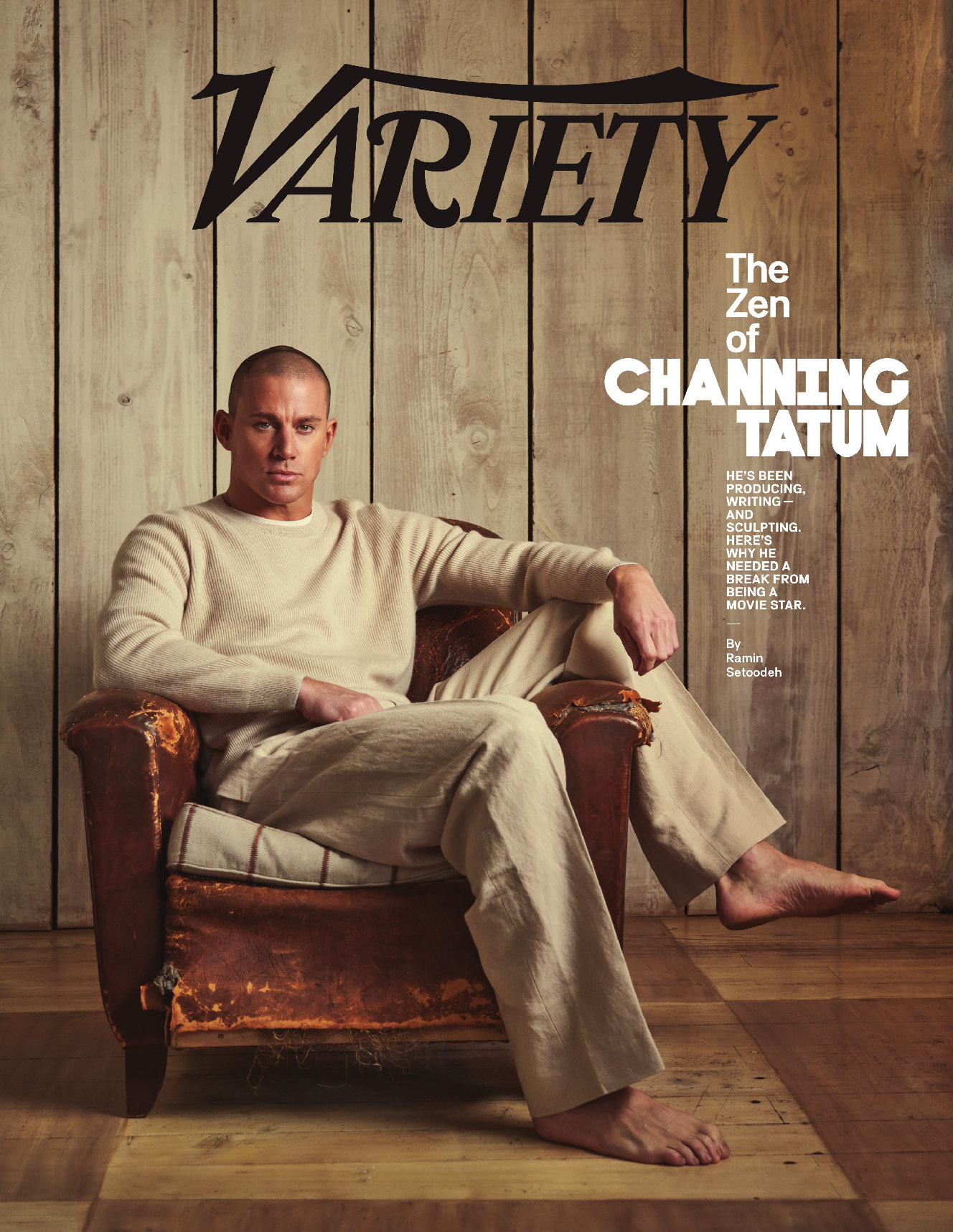 “I shut off my Marvel machine. I haven’t been able to see any of the movies,” Tatum told Variety.

Looks like actor Channing Tatum doesn’t have such a super reaction to the Marvel Cinematic Universe. He says he can’t watch any of the films.

The reasons are personal, a direct result of Disney shelving his proposed “X-Men” spinoff “Gambit.”

“We wanted to make a romantic comedy superhero movie,” Carolin told Variety. “The thesis was the only thing harder than saving the world is making a relationship work.”

But there was a divide between what Tatum and Carolin wanted and the studio’s wishes.

“The studio really didn’t want us to direct it,” Tatum said. “They wanted anybody but us, essentially, because we had never directed anything.”

Still, the film was cast and a release date was set for October 2016.

However, Disney’s merger with Fox made “Gambit” a corporate casualty, according to Carolin.

“Once ‘Gambit’ went away, I was so traumatized,” Tatum said. “I shut off my Marvel machine. I haven’t been able to see any of the movies. I loved that character. It was just too sad. It was like losing a friend because I was so ready to play him.”

But Tatum is open to playing the character should Disney reconsider the project.

“Uh, yeah, I would love to play Gambit,” he said. “I don’t think we should direct it. I think that was hubris on our part.”

Today I have update the gallery with a few stills and the official poster for Channing’s upcoming movie ‘The Lost City’ which he stars alongside Sandra Bullock.

Reclusive author Loretta Sage writes about exotic places in her popular adventure novels that feature a handsome cover model named Alan. While on tour promoting her new book with Alan, Loretta gets kidnapped by an eccentric billionaire who hopes she can lead him to an ancient city’s lost treasure from her latest story. Determined to prove he can be a hero in real life and not just on the pages of her books, Alan sets off to rescue her.

The Lost City of D , Trailer